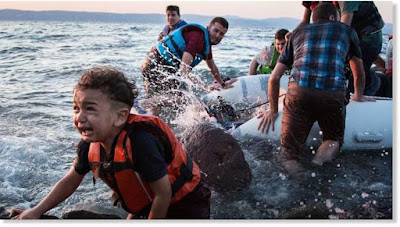 On November 13, 2015 Muslim terrorists stormed into the world of Parisians taking lives, hostages, injuring the innocent, and striking fear into the heart of millions around the world. They absolutely did what they planned to do. Equally as important to the dead bodies is the fear in our hearts. It's what they do. They are terrorists after all. They inflict terror.

In the wake of this tragedy, a lot of people are ready to shut and lock the iron doors to our ivory palace (America) and refuse entry to the masses. That's fear. Yes, it's possible (even plausible) that some of those fleeing will end up as terrorists in our own back yard. There is wisdom in the multitude of counsel. We should look at the situation with wide-open eyes that seek to protect the lives of innocent Americans.

I totally agree with that.

I am responsible for me.

I am responsible for how I respond to the broken and even for how I respond to those who would seek to destroy my life. Prayer is important and we should each of us, every one, seek the face of God as we never have before. But, we'd better, as believers, put some feet to those prayers. We'd better actually go out there and do that love your neighbor thing. We'd better stop responding as Americans and start responding as children of the King. Remember when God told the Israelites to treat the foreigner just as a native born Israelite? Remember when Jesus said whatever you do to the least of these you do it unto me? Can you really imagine looking into the eyes of Jesus and telling him that the risk was just too great?

For years Mozambique descended into a war that killed thousands upon thousands and displaced millions. And though today we enjoy a sort of pseudo-peace, I think war is pretty much in the back of our minds most of the time. You see, the first generation of people to know a free Mozambique are only 23 years old. My generation of Mozambicans were all teenagers when peace came to Moz for the first time. I have had the privilege to sit and listen to their stories and the stories of the older generations. I've listened as a grown man grappled with forgiving the soldier who drove a knife through his father's heart in front of his ten-year-old eyes. I've listened as a friend told me that he watched his mother being gang raped. I've heard stories of people kidnapped, maimed and killed. I've heard countless stories of how soldiers would take infants and bash their skulls against a tree. I've listened to stories of how people would dig their own graves, climb in, and then wait for the bullet that would end their lives. I've heard how people ate grass, banana peels, dirt and drank dirty water to just stay alive one more day. People walked miles and miles to get to refugee camps in neighboring countries. People still talk about "during the war" as if it was last year and not almost 25 years ago because the scars of war still remain on their hearts. It doesn't go away.

That's what people are fleeing.

Loving people like that - the ones with scars, and terror, and distrust built into the very fiber of their being isn't easy. Wading into the messiness and brokenness of people's lives is hard work. It's not even rewarding most of the time. For every tiny little victory you achieve, there are ten giant obstacles to be faced. There's always that heartbreak and realization that they don't love me or even appreciate me - just what they're able to get from me. Loving wounded people creates its own wounds in your heart. It's an often thankless task.

Yet, the job of being Jesus' hands and feet isn't about me. It isn't about how I feel when I do it. It's not even about "them." It's about HIM. It's about his glory and his glorious grace for a world so desperately in need of His redemption. What in the world has made us think that Jesus' most pressing concern is our safety and security? Think of the generations that have come before us who were beaten, and jailed, and burned, and speared, and shot, and maimed and killed. Don't you think they were afraid too? Yet, when the moment counted, they did not shrink back in fear. They chose danger because though the enemy can kill the body, he cannot capture a soul that Christ has set free.

What if these aren't the end times? What if this is our generation's moment to let Jesus shine? What if one day our great-great-grandchildren and all of history is judging us now by how we loved? What if this moment is the moment that leads to one last great revival before Jesus comes back to claim his own? What if this is our chance to let faith be more important that fear?

This issue for me is not principally about the refugees or how the American government deals with those refugees. I hope we can help people who are giving up their whole lives to gain life. But, it's not even about that. We, especially as American Christians, have sat in our comfort for too long. We need to get dirty because our God is dirty. I don't mean that to be sacrilegious. But, our magnificent, holy God wallows in the mud and mirk of our lives. The nasty and the desperate have not turned him away. The time has come for us to wade into the mire of the depravity and brokenness of the dying.

You will get dirty. You will be more broken yourself. You might even die.

Revelation 12 speaks of those men and women who "did not love their lives so much as to shrink from death." It is time for us to answer the call. Yes, answer the call about the refugees. But, more than that, to answer His call to dying world. It is a call to give up our comfort and our way of life for something that is so much greater than our blip of a second on planet earth. To many to name have gone before us and paid the price. When the baton is now passed to us will we turn our eyes and close our ears?

I'm not saying we should be foolish. The Bible has plenty to say about wisdom and counsel. But, I am saying to live like those who cannot die. I am saying to live unselfishly and love lavishly. I am saying be generous and kind. I am saying pick up your cross. Maybe that is foolish - to the world anyhow. Jesus was radical and if you don't know that, you may not know Jesus.

This is not an American problem.

But it is a Christian command.

Posted by jennigirlmz at 1:28 AM No comments: