Okay.....well I'm going to wade into the waters of the 'Duggar Scandal.' I don't watch the Duggars' show, and never have - except for those few occasions that I watched an episode or two with my sister while I was on home assignment.

However, I can't escape the unadulterated venom and hate being spewed forth on Facebook by Christians and non-Christians. The whole situation makes me mad, and really sad, too. I'm sad because what happened to those girls and what Josh did, doesn't just go away. It creates scars. The scars may be long healed, but they're there as a forever reminder of what happened. That's a scar that no child should carry into adulthood. And, now, all these years later their pain, their embarrassment, their shame is being put on very public display. How utterly awful. Maybe even more painful that what actually happened.

People are screaming from the roof tops that he is a child molester. What he did was wrong, and he knew it was wrong. What he did was disgusting and repulsive. But, let's remember that he was a child himself. I do not know anyone, who, if this happened in their family would haul their fourteen-year-old off to let the law deal with him. To have him registered as a sex-offender FOR LIFE. To ruin his chances for college, a good job, a loving family. Yes, anyone would be heartbroken for their daughters, but you'd be equally heartbroken for your son. Maybe even more so for your son. You'd be wondering how in the world this child that you love could do that - especially to another child that you love. You'd be wondering where you went wrong, how you didn't see this coming. Every instinct within you would want to protect your son just as much as those instincts would tell you to rescue your daughter.

Josh's sin doesn't make him or anyone in his family incapable of having an opinion on sin. Lying is a sin. But, I've lied. I still believe it's a sin. Every time I catch one of my little kiddos in a lie, I call them on it. I tell them it's a sin and that we don't do it because it breaks God's heart.

Maybe I'm more capable of recognizing sin and it's damaging effects because I am a sinner.

They haven't pretended to be anything they are not. They are imperfect people trying to live before a holy and perfect God. They (and we) don't and never will attain that standard of perfection until we trade in our fallen world and our sinful souls for the ones waiting on the other side of the veil.

That's what sin does. It lures us, calling us for that momentary pleasure, that costs us so much more in the end. A man with a precious little family has lost his job and his family is losing their show. Sure, there are other jobs and life will go on for everybody without that show - even the Duggars. Those, in the grand scheme of things, are actually quite small. But Josh Duggar and his parents, family members who weren't even alive twelve years ago, his wife, his little children, and the sisters he harmed will have to deal with all those old feelings and new ones too as it is played out on a national stage. Is that really fair? Do you really want to pay for all your youthful indiscretions well into the adult life you've built for yourself?

Of course you don't.

And thank God, that's not the price that God requires of us. God sent His holy and perfect son to pay the price for the wickedness of our souls. He remembers our sin NO MORE. He buries it as far as the east is from the west.

I don't think it's right, to call for grace and turn our backs on justice. One doesn't really exist without the other. However, all these years later, after repentance, what is justice? The law can't do anything anymore. Is is justice to drag a man, his wife (who knew all along), and his young children through the mud? Is is justice to smear a family and accuse them of all sorts of things and call them all kinds of horrible names? Is it justice to have to explain to the world every disgusting detail of your sin? I'm not saying consequences don't exist or that laws shouldn't be followed. I'm just asking you what is justice in this situation and who exactly is qualified to apply those consequences. I sure don't want to, because I know I don't have a leg to stand on.

I hope and pray that those girls have found the healing that they need. I hope that they have allowed the precious love of Jesus to penetrate so deeply into their souls that there is no room left for the damage that their brother's sin caused. I also hope that Josh Duggar will allow that same love to wash his sins whiter than snow. Surely as Christians we can see that there is no room for guilt and shame. Jesus' blood washed all that away.

That's the thing about grace. It's scandalous.  It's undeserved. Completely unearned - washing away the darkest sin from the most vile sinner. We all want this kind of grace. We all are in desperate need of this scandalous grace.

Don't demand grace for yourself that you aren't willing to give to others. Don't be so sure about what you would do until you are in that very situation. Don't demand that a person pay for a sin God is no longer charging him with. Don't be a part of the crowd that's "shooting the wounded."

If anything, I hope this story calls each of us to a higher standard of living. I hope this teaches us the long-lasting, life-destroying, painful effects of sin. Satan demands a hidden cost, and when that payment comes due, it's is always much higher price to pay than we ever dreamed.

Jesus says that price has already been paid.
Posted by jennigirlmz at 12:32 PM 2 comments: 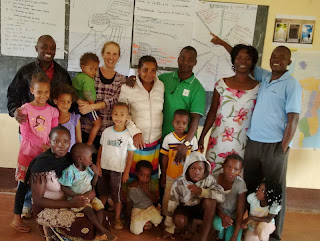 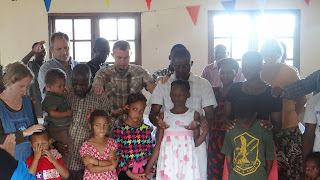 Praying blessings over our friends! 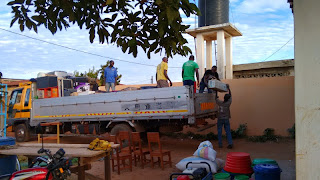 This morning, we said our final goodbyes to our dear friends and teammates and I watched them head off to their new adventure with a little lump in my throat. Some of these folks I've known since my first trip to Mozambique in 2006. Others I've known since my very earliest days in Mozambique. And, some, I've only had the opportunity to know since I came to Lichinga in 2013. However, they are all dear, sweet friends and I will miss the greatly.

In my flesh, I want to scream about the unfairness of it all. I mean, all of you know what it's like to say goodbye to someone whether it be forever or just because distance is creating a void. Things were just fine the way they were. Our team was healthy and happy and we valued their place on our team. In a missionary's life, life is often marked by goodbye on one side of the ocean or the other and it is a word you come to dread.

However, God moved in some pretty grand ways to take this team to Nampula - a place where there is no YWAM base and where there are people desperate for the truth of the Gospel. So, I'm excited for all the possibilities and plans that God has for them and the Makonde people.

There will certainly be a void for awhile as our team adjusts and evens out again. Some of these folks have been here for over 15 years. Lori and Victor met and married here. Within the walls of the DTS, some of these folks learned to love Jesus and each other. Leaving was a significant step as well. But, I have to be confident that this "see you later" is for the benefit of the kingdom and that little "hiccup" in our hearts is so worth the soul of another.

Every sacrifice that it is made for the cross of Christ is undoubtedly worth it. Whatever price we pay to know Jesus, to show His love, share His light, and spread His grace is so very small. He gave all and, surely so can I. The answer to the Savior  - whatever He may ask - is always, always, yes.

However, I do long for the day when there are no more goodbyes (whether temporary or permanent). I long for the day when I do not struggle so with my old man. When hurt is something I don't really even remember because I am with the One who loved all my hurt away. What a glorious day, when I can hug the ones I've loved and lost. I welcome the day when evil, and selfishness, and sin no longer rule the day and it is no longer necessary to pay the ultimate price to name the name of Jesus. How beautiful will that day be when the only thing on my agenda is loving and worshipping my Savior.

With the tumult in our world, the evil, and all the chaos I believe that we are living in those last moments. Maybe those "last moments" will be a few years, maybe it will be fifty - or even more. But, it is evident that our world is spiraling downward and losing all sight of the One who came to save them.

On the day of goodbyes, that I wish I didn't have to be said, I want to encourage you that nothing you give up or do without will even matter for a millisecond when you see HIS face. In fact, I'll bet we will all wish that we gave more and sought our on pleasure less. No earthly gain will have any significance in that moment. All that will matter will be Him and those we helped to know Him.

So, please, be ever diligent in hearing His still small voice. Say goodbye. Give more. Love selflessly. Value souls over things. He is coming and all this regret and sadness and difficulty will pass. What will remain are those who will worship Jesus forever with us. May we all invest in the expansion of that forever kingdom and its forever God.